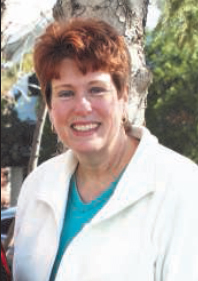 Becky joined Janesville Woman’s Club in 2003 and has been an active member since day one. She served as the final Junior Woman’s Club president during 2005-2006 when the Senior Woman’s Club and the Junior Woman’s Club were being merged into a single organization. She has also been very active in FP108SJ, the foundation that takes care of the Woman’s Club Building having served two year terms as each president, vice president, past president and secretary. Becky organized the successful publication of our cookbook What’s Cooking at 108 South Jackson as a fundraiser to help pay for the new roof of the building and has been involved in our annual Style Show fundraiser for many years including chairing the silent auction several times. She also does the layout and is co-editor of this Janesville Women newsletter.

Becky is looking forward to the 2014-2015 year and plans to emphasize new member recruitment and encourage all Woman’s Club members to become more active in club projects and activities. She says “I love the Janesville Woman’s Club. I have met and become friends with so many interesting women. Like so many things in life, you get out of it what you put into it and being involved and active with club projects and activities has been fun!“

Becky is the co-owner of J & B Products, an educational publisher. A native of Janesville, she graduated from Craig in 1980 (when she was Becky Dowd) and from Luther College in 1984. She is married to Chip and they have three children: Abby (18), Tom (28) and Tim (32) as well as three granddaughters: Caylin (3), Charlotte (2) and Juliet (2) and are expecting a grandson later this year. They have one rescue dog, Belle and a ten year old goldfish that Abby won at the 4-H fair when she was little—that fish is so old he isn’t even gold anymore.

This site uses Akismet to reduce spam. Learn how your comment data is processed.